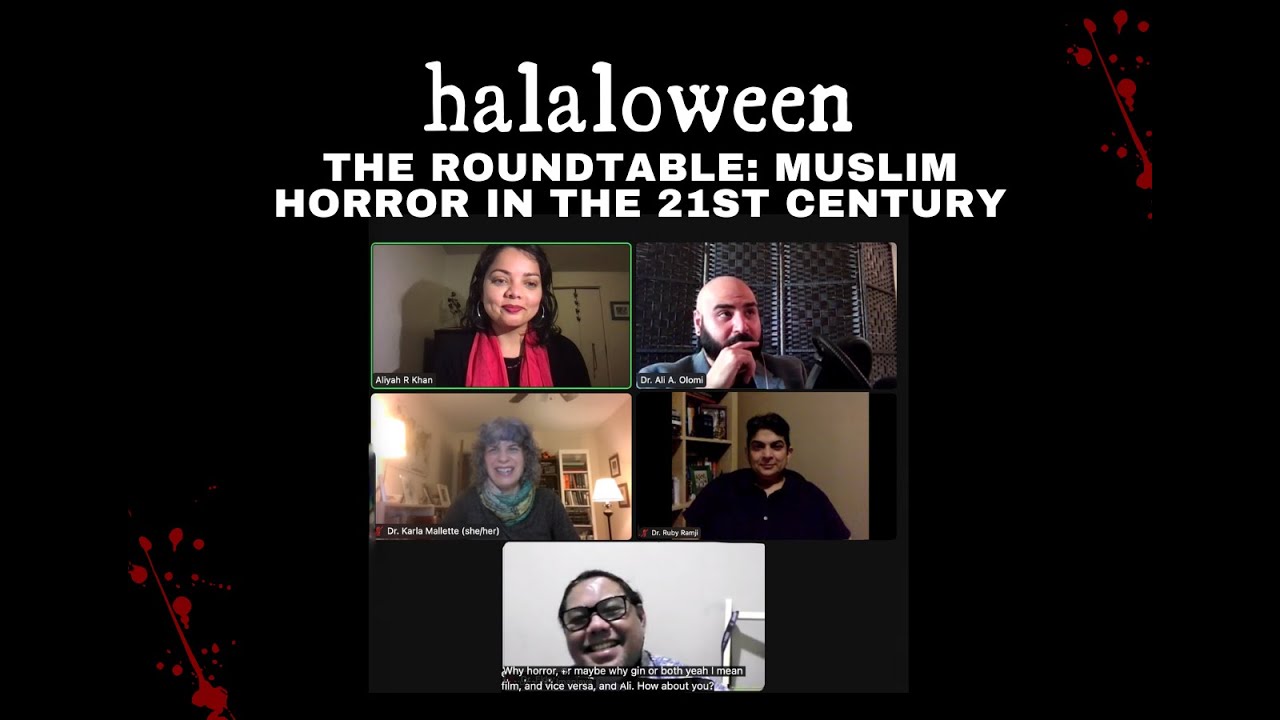 On Thursday, October 27th, we wrapped up Halaloween with a panel discussion on Muslim horror, the use (and misuse) of Islam and the Quran in the horror genre, feminist politics in horror, and how each region differs in its creation of horror films.

Dr. Ali A Olomi is an assistant professor of history at Loyola Marymount University in Los Angeles, California and an affiliated scholar with the Rutgers Center for Security, Race, and Rights. He is a historian of the Middle East and Islam researching, writing, and publishing on medieval and modern Muslim thought. He studies how Muslims imagined the “Islamic world” at the intersection of religion, science, and empire. Dr. Olomi’s research examines the Muslim imagination of the monstrous through the djinn/jinn, the early history of astronomy and its role in empire-building, and Islamic apocalypticism and cosmology.

Dr. Ekky Imanjaya is a faculty member of Film Department, Bina Nusantara (Binus) University, in Jakarta. In 2018, He finished his doctoral studies in Film Studies at University of East Anglia, United Kingdom. Previously, Ekky got his masters degree majoring Philosophy at Universitas Indonesia (2003) as well as in Film Studies at Universiteit van Amsterdam (2008). Ekky is also a film critic specializing in Indonesian cinema, and a board member of the Madani Film Festival and Jakarta Film Week. He is also a film critic and has published his articles in many popular magazines and newspapers as well as academic journals, including Cinemaya, Colloquy, Plaridel and Asian Cinema. He published some books regarding Indonesian films, pop culture, and Islamic culture issues, including _Mencari Film Madani: Sinema dan Dunia Islam_ (2019) and _Mujahid Film: USmar Ismail_ (2021), “99 Film Madani” (2022, with Hikmat Darmawan) and the Indonesian translation of his doctoral thesis. Ekky is currently the chairperson of Film Committee at Jakarta Arts Council (2021-2023).

Dr. Rubina (Ruby) Ramji is an Associate Professor of Religious Studies in the Department of Humanities at Cape Breton University. Her research focuses on images of Islam in various media discourses, including film and television. She also works on issues of gender, ethnicity, diversity and multiculturalism. Ramji is co-editor, with Alison Marhsall, of the Bloomsbury Handbook on Religion and Migration (Bloomsbury 2022) and with Peter Beyer, of the book Growing Up Canadian: Muslims, Hindus, Buddhists (MQUP 2013) and is the author of a variety of articles and chapters in books including “Examining the Critical Role American Popular Film Plays in Maintaining the Muslim Terrorist Image, Post 9/11” in the Journal of Religion and Film (2016), “Maintaining and Nurturing an Islamic Identity in Canada – Online and Offline” in Religion in the Public Sphere: Canadian Case Studies(Eds., S. Lefebvre, & L. Beaman, University of Toronto Press 2014), “Muslims in the Movies” in The Bloomsbury Companion to Religion and Film (Ed., W. Blizek, Bloomsbury 2013); and, “Representations of Islam in American News and Film: Becoming the ‘Other’” in Mediating Religion: Conversations in Media, Religion and Culture (Eds., J. Mitchell & S. Marriage, T&T Clark 2003). Ramji is the Film Editor of the Journal of Religion and Film and served as Senior Editor of Golem: Journal of Religion and Monsters for four years. She was a Chair of the Religion, Film and Visual Culture Group in the American Academy of Religion for six years and the President of the Canadian Society for the Study of Religion (2012-16).